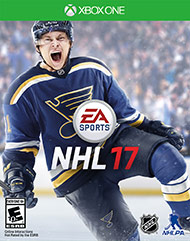 The soundtrack was released on July 27, 2016, and was the first game in the PS4/Xbox One era to have a licensed soundtrack play in the main menus. However, the player can go back to NHL 15/NHL 16's orchestral themes by changing the Menu Music type in the settings to NHL 17 Theme.

Retrieved from "https://vgost.fandom.com/wiki/NHL_17?oldid=41487"
Community content is available under CC-BY-SA unless otherwise noted.