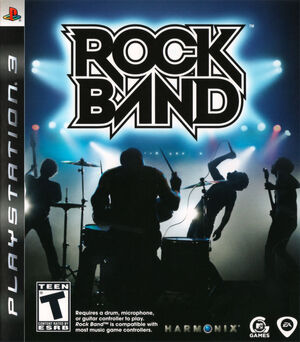 A total of 13 bonus songs can also be unlocked through the game's Career mode. The bonus setlist consists of bands formed by Harmonix employees as well as local bands from near Harmonix's headquarters in Cambridge, Massachusetts or from Boston. The exceptions are Flyleaf, Crooked X, and Mother Hips. "Timmy and the Lords of the Underworld" comes from the titular fictional band featured in the comedy show South Park.

The Wii version of Rock Band features 5 additional songs originally released as downloadable content on the PlayStation 3 and Xbox 360 versions of the game.

Retrieved from "https://vgost.fandom.com/wiki/Rock_Band?oldid=43855"
Community content is available under CC-BY-SA unless otherwise noted.